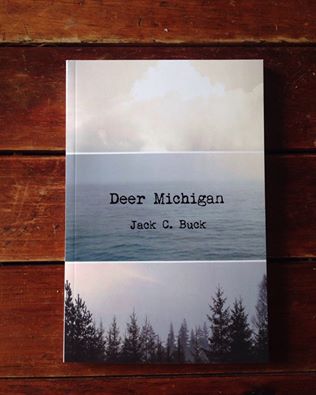 Jack C. Buck’s micro fiction is some of my favourite, and since publishing his story, write talk-talk if you have no one to talk-talk with, in the third issue of Severine, I’ve seen his writing appear all over the place.  A couple of months ago, I spotted on Twitter that Truth Serum Press would be publishing a collection of his fiction at the end of this year.  Jack asked if I’d like to review Deer Michigan, so I got it early (yay!), but you can get a copy from next week.

A collection of 60 pieces, Deer Michigan is  Jack’s writing weaves so many stories into such a short space that each piece feels much longer than it is – and I mean that in the way that micro fiction can sometimes feel a bit wanting, like there’s not quite enough story, and that’s why that has to be the medium.  Here, the writing is wound tightly around the core of each story, giving a snapshot of a place, a person, but with just enough time to really look at them.

Once of my favourite things about flash and micro fiction is that it doesn’t have the space to introduce a ton of characters, or to spend five pages describing the scene, so instead, you’re just dropped in to the centre of whatever’s happening, and you have to figure it out for yourself.  It’s much more like being a fly on the wall.  Deer Michigan throws you into the centre of relationships, between lovers, families, friends, places, and lets you figure out the dynamics.  The stories are mostly quiet, their narrators sincere, and many of the pieces read like poetry, but they are rich, and full of life and love.

I’ll be tweeting when Deer Michigan is available to buy, but keep an eye out!

One thought on “Reading… Deer Michigan”

Hi! I'm Terri-Jane. I'm usually found reading, tweeting, writing, posing on instagram, or eating jaffa cakes, and editing Severine Lit. You can email me at terri.twoninethree@gmail.com, or you can find me in one of these places...